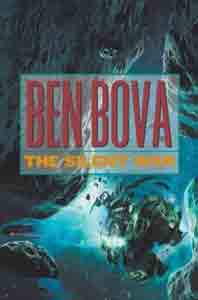 The Silent War : Book III of The Asteroid Wars

Synopsis of The Silent War : Book III of The Asteroid Wars

When corporations go to war, standard business practice goes out the window. Astro Corporation is led by indomitable Texan Pancho Lane, Humphries Space Systems by the rich and ruthless Martin Humphries, and their fight is over nothing less than resources of the Asteroid Belt itself. As fighting escalates, the lines between commerce and politics, boardroom and bedroom, blur--and the keys to victory will include physics, nanotechnology, and cold hard cash.

As they fight it out, the lives of thousands of innocents hang in the balance, including the rock rats who make their living off the asteroids, and the inhabitants of Selene City on Earth's moon. As if matters weren't complicated enough, the shadowy Yamagata corporation sets its sights on taking advantage of other people's quarrels, and space pirate Lars Fuchs decides it's time to make good on his own personal vendetta.

It's a breakneck finale that can end only in earth's salvation--or the annihilation of all that humankind has ever accomplished in space.

Reviews of The Silent War : Book III of The Asteroid Wars

Bova once more assures us that he is one of the masters of this genre. -- Cindy Lynn Speer, Fantastica Daily

While I can't say this novel stands out in Bova's ongoing Series, readers will no doubt find it a fairly satisfying climax to this portion of his epic. -- Paul Di Filippo, Scifi.com

The story line moves faster than the speed of life until the final confrontation. -- Harriet Klausner, BooksNBytes

Set in a technophilic universe where humanity's survival goes hand-in-hand with its ability to colonize the solar system, this incredibly fast-paced novel is powered by the Author's ability to craft a wide variety of realistic characters that readers can't help but empathize with. -- Paul Goat Allen, Barnes and Noble

Although I wish that Bova would give his characters more life and a fundamental story question to help them through the novel, the modern world-building and the old-fashioned space opera action keeps me coming back to this Series and to Bova. -- BooksForABuck