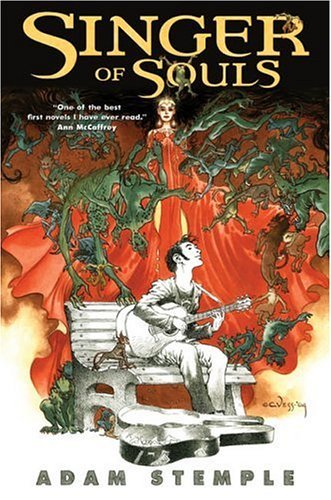 Synopsis of Singer of Souls

Leaving his life of petty crime and drug abuse behind, young Douglas flees from Minneapolis to Edinburgh, Scotland, to his stern but fairminded Grandma McLaren, who will take him in if he can support himself. Fortunately, few cities are friendlier than Edinburgh to a guitarist with a talent for spontaneous rhyme, and soon Douglas is making a decent living as the busker who can write a song about you on the spot.

But Edinburgh has its dangers for the unwary. The annual arts festival, biggest in Europe, draws all manner of footloose sorts, and tempted by the drugs offered by a mysterious young girl, Douglas stumbles.

What follows isn't what he expects. Suddenly, Douglas can see the fey folk who invisibly share Edinburgh's ancient streets...in all their beauty and terrifying cruelty. Worse, they can see him, and they...re determined to draw him into their own internecine wars--wars that are fought to the death.

Reviews of Singer of Souls

Fans will enjoy Adam Stemple's zany joy ride in the streets of Edinburgh from a distinctly weird perspective. -- Harriet Klausner, The Best Reviews