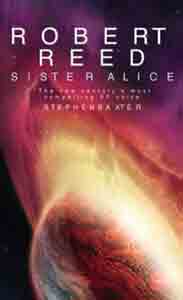 Some 10 million years in the future, in a galaxy heavily populated by humans and other advanced species, a thousand trustworthy humans and their cloned offspring have been granted an incredible power that they may preserve a peace that has endured for eons. They can build worlds wherever they wish and can terraform any wasteland. But the arrival of a woman as old as the great peace itself brings uncertainty and fear. For she brings with her a warning: the tale of an ancient crime that threatens to destroy the peace that has been so carefully crafted. A far-future epic of god-like humans and their colossal blunders, SISTER ALICE is a novel of incredible imagination from the Author of the acclaimed MARROW.

The story is readable but I couldn't help wishing he could have been a bit more precise with the more SF aspect of their abilities. -- GF Willmetts, SF Crowsnest

I enjoyed Sister Alice a lot, but felt that the techno-babble almost demanded more attention; I wanted more of the Talents explained, and in particular certain plot holes beg for this. -- Dave Kennedy, DKennedy.org

Ideas don't get much bigger. -- Jon Courtenay Grimwood, The Guardian

Sister Alice is one of the most imaginative and compelling SF novels of the year. -- D. Douglas Fratz, Scifi.com

Reed displays a great, sweeping and certainly visionary imagination here, but ultimately the sheer strangeness of the concepts at work, seemed too far removed for me to comfortably grasp. -- John Berlyne, SFRevu