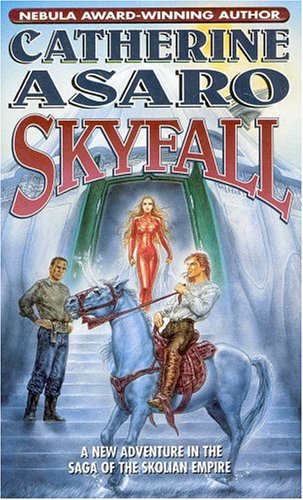 Catherine Asaro exploded onto the science fiction scene in 1995 with the publication of her widely acclaimed debut novel, Primary Inversion, which introduced readers to the vast and intricate far-future Saga of the Skolian Empire. She won widespread acclaim for her innovative blend of cutting-edge physics, interstellar intrigue, and passionate romance. Over the next few years she garnered nominations and awards in both SF and romance. Then in 2002, Catherine Asaro won the Nebula Award for Best Novel for The Quantum Rose, the sixth installment in her Saga of the Skolian Empire.

If you haven't caught on to the myriad pleasures to be found in this multiple award-winning epic SF Series, here's the perfect chance. Skyfall goes back to the beginning, to the re-birth of Skolia, showing how a chance meeting on a backwater planet forged a vast interstellar empire.

Kurj, a provincial ruler on a primitive planet, is plagued by inner demons. But when he meets Roca, a beautiful and mysterious woman from the stars, he whisks her away to his mountain retreat, inadvertently starting a great interstellar war, and birthing the next generation of rulers for the Sklolian Empire.

Revel in the newest grand adventure of this Nebula Award-winning Series.

All things considered, while Skyfall is a great work of storytelling it falls notably short of the high mark set by Asaro's earlier works -- Todd V. Ehrenfels, SFRevu

...by skillfully intercutting the SF moments with the kissy-face cuddlings, Asaro sustains our interest in whether true love will win out over the more brutal aspects of life. -- Paul Di Filippo, Scifi.com

Enjoy the non-stop action, adventure, and danger in Skyfall and then see if you can say no to the rest of the Series. -- Lisa DuMond, SFSite

This is Science Fiction Romance at its finest. -- Cindy Lynn Speer, Fantastica Daily