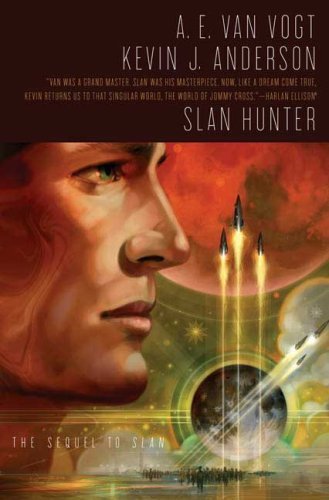 This startling SF adventure novel is a collaboration between the classic SF Grand Master, A. E. van Vogt, and contemporary master Kevin J. Anderson. At the time of his death in 2000, van Vogt left a partial draft and an outline for the sequel to his most famous novel, Slan. van Vogt's jam-packed, one-damn-thing-after-another story technique makes his active plots compulsively readable. Now the story is completed by Anderson, and is sure to be one of the most popular SF novels of the year. Slans are a race of superior mutants in the far future, smarter and stronger than Homo sapiens and able to read minds. Yet they are a persecuted minority, survivors of terrible genocidal wars, who live in hiding from the mass of humanity. Slan Hunter tells of this towering conflict in the far future, when a new war among the races of mankind bursts out, and humanity -- all types of humanity -- struggles to survive, and of course of the heroic Jommy Cross, mutant hero of Slan.

...readers looking for a sequel that matches the original will be disappointed. -- Sam Lubell, SFRevu

... this volume honors its predecessor in a fairly commendable manner...but it's not, and possibly never could be, the Slan II from some imaginary 1943 that we all dream of. -- Paul Di Filippo, Scifi.com

...reads as if the grandmaster wrote the tale... -- http://harrietklausner.wwwi.com/review/slan_hunter_anderson