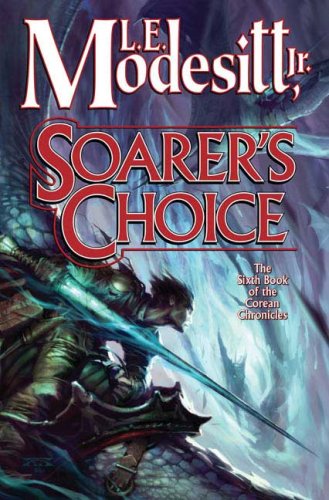 L.E. Modesitt, Jr. returns to the world of Corus and concludes the trilogy of the intertwined stories of Dainyl, the Alector, and Mykel, the native soldier, which began in Alector's Choice and Cadmian's Choice. The civilization of the Alectors, which has farmed and developed all life on Corus to produce sustaining life force for their vampiric civilization, must move wholesale from one planet to another every few thousand years as it exhausts the life force of another world. This time, two worlds have been prepared, and the time is at hand for the great move. And Corus is the looking like the loser, to be abandoned by the civilizing forces of the government of Alectors, but used as a dumping ground for malcontents and others who don't make the cut to move on to a richer new world. This neither bodes well for the future of human civilization, nor for the honest Alector's such as Dainyl, trying to hold everything together, as all systems are failing. But the mysterious Ancients, the Soarers, are a force to be reckoned with, and they may hold a powerful and destructive trump card.

The details that he shares create believable characters, that are both powerful and flawed. -- Bill Lawhorn, SFRevu

Readers will choose to soar with L.E. Modesitt, Jr. as he takes his fans on quite a ride. -- Harriet Klausner's Review Archive