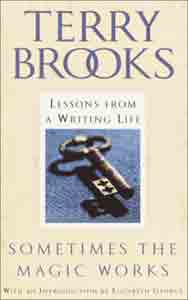 Sometimes the Magic Works: Lessons from a Writing Life

Synopsis of Sometimes the Magic Works: Lessons from a Writing Life

In 1977, the New York Times Trade Paperback Bestseller list-back then the exclusive province of self-help guides, cartoon collections, and any number of cat Books-played host to its very first work of fiction: The Sword of Shannara, an epic quest through a mythical land, by first-time Author Terry Brooks. Nineteen New York Times bestselling novels later, it would be easy enough to just say: ". . . and the rest is history." But when it comes to quests, everyone knows that getting there is half the fun. Now, Terry Brooks tells the story of how he got there-from beginner to bestselling Author-and shares his secrets for creating unusual, memorable fiction.

Writing is writing, whether one's setting is a magical universe or a suburban backyard. Spanning topics from the importance of daydreaming to the necessity of writing an outline, from the fine art of showing instead of merely telling to creating believable characters who make readers care what happens to them, Brooks draws upon his own experiences, hard lessons learned, and delightful discoveries made in creating the beloved Shannara and Magic Kingdom of Landover Series, The Word and The Void trilogy, and the bestselling Star Wars novel The Phantom Menace.

In addition to being a writing guide, Sometimes the Magic Works is Terry Brooks's self-portrait of the artist. Here are sketches of his midwestern boyhood, when comic Books, radio serials, and a vivid imagination launched a life long passion for weaving tales of wonder; recollections of the fateful collaboration with legendary editor Lester del Rey that changed not only the Author's life but the course of publishing history; and an eye-opening look at the ups and downs of dealing with Hollywood, as a writer of official novels based on major movies by both Steven Spielberg and George Lucas.

"If you don't think there is magic in writing, you probably won't write anything magical," says Terry Brooks. This Book offers a rare and wonderful opportunity to peer into the mind of (and learn a trick or two from) one of fantasy fiction's preeminent magicians.

Reviews of Sometimes the Magic Works: Lessons from a Writing Life

...just the way a Book on writing should be. -- Mark Graham, Rocky Mountain News