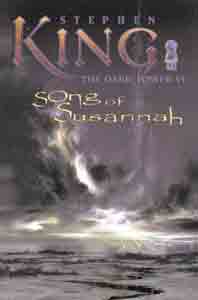 Synopsis of Song of Susannah (The Dark Tower VI)

The sixth volume in The Dark Tower Series - the most anticipated Series of publications in Stephen King's legendary career - The Dark Tower VI; Song Of Susannah is a pivotal instalment in the epic saga. It provides the key to the quest that defines Roland's life. In the next part of their journey to the tower, Roland and his band of followers face adversity from every side: Susannah Dean has been taken over by a demon-mother and uses the power of Black Thirteen to get from the Mid-World New York City. But who is the is the father of her child? And what role will the Crimson King play? Roland sends Jake to break Susannah's date with destiny, while he himself uses 'the persistence of magic' to get to Maine in the Summer of 1977. It is a terrible world: for one thing it is real and bullets are flying. For another, it is inhabited by the Author of a novel called 'Salem's Lot. Song Of Susannah is driven by revelation and by suspense. It continues the Dark Tower seamlessly from Wolves Of The Calla and the dramatic climax will leave readers desperate to read the quest's conclusion.

Reviews of Song of Susannah (The Dark Tower VI)

Song of Susannah is shorter than previous Books in the Series (just as well, I think), and it does provide necessary links to the grand finale, but in all, it's the weakest work in the Series. -- Mark Graham, The Rocky Mountain News

Far from heading down the tubes, Song of Susannah is by far the best of the sequence so far, and at 440 pages has none of the bagginess that has occasionally dogged the Series in the past. -- Matt Thorne, The Independent

The sixth tale of the Dark Tower Series continues the path towards the finish with two prime exhilarating subplots that will enthrall the audience. -- Harriet Klausner, BooksNBytes

The last three chapters are a triple shot to the gut, guaranteed to push the buttons of even the most hardhearted reader. -- Dorman T. Shindler, The Denver Post

King takes the postmodern hand, calls his own bluff and raises the stakes with even more dollops of autobiography and literary cross-referencing. -- Michael Berry, The San Francisco Chronicle