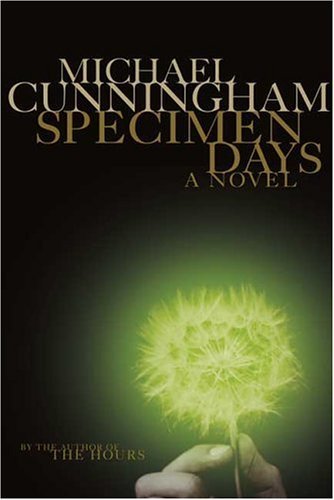 In each section of Michael Cunningham's bold new novel, his first since The Hours, we encounter the same group of characters: a young boy, an older man, and a young woman. "In the Machine" is a ghost story that takes place at the height of the industrial revolution, as human beings confront the alienating realities of the new machine age. "The Children's Crusade," set in the early twenty-first century, plays with the conventions of the noir thriller as it tracks the pursuit of a terrorist band that is detonating bombs, seemingly at random, around the city. The third part, "Like Beauty," evokes a New York 150 years into the future, when the city is all but overwhelmed by refugees from the first inhabited planet to be contacted by the people of Earth.

Presiding over each episode of this interrelated whole is the prophetic figure of the poet Walt Whitman, who promised his future readers, "It avails not, neither time or place . . . I am with you, and know how it is." Specimen Days is a genre-bending, haunting, and transformative ode to life in our greatest city and a meditation on the direction and meaning of America's destiny. It is a work of surpassing power and beauty by one of the most original and daring writers at work today.

This luminous novel by the Author of the literary bestseller The Hours is a moving meditation on the humanizing power of empathy and the horrors stemming from its lack, as well as a loving exploration of New York City, as a microcosm of America itself, through lenses of myth, poetry and genre fiction. -- Paul Witcover , Scifi.com

"Specimen Days" may pale somewhat in comparison to "The Hours"; however, the intertextual dialogue between the three novellas and the sheer invention of the project should provide sufficient rewards for any reader. -- James Schiff, Raleigh News & Observer

...a challenging and engaging work of fiction that proves Cunningham is more than a one-trick pony. -- Robert Weibezahl, BookPage

Cunningham is still fonder of juxtaposition than sequence, and characters still lapse on occasion into a mystifying dreaminess of motive. But plot is crucial to ghost stories, thrillers, and science fiction, and Cunningham's experimentation with the genres brings his prose a new energy. -- Caleb Cain, New York Magazine

While "Specimen Days" may have its flaws, it is clearly and often compellingly the work of a gifted storyteller with an ambitious mind and a lyrical writing style. -- David Wiegand, San Francisco Chronicle

Cunningham has made something substantively and stylistically bold out of these stories, keeping his many fires stoked and pulling the parts together as a brilliant whole. -- Wingate Packard, The Seattle Times

While one applauds Cunningham for expanding his reach, for posing an estimable challenge to himself, Whitman's great yawping voice, with its democratic prophecies and negatively capable message, is drowned out by the din of these energetic plots. -- Ariel Gonzalez, The Miami Herald

Each of his worlds is fully realized, and each return of Whitman's words asks us to think about what changes and what endures. -- Michael McGregor, Portland Oregonian

Whereas ''The Hours'' overrode its schematic structure with its closely observed characters and intricate musical patternings, ''Specimen Days'' reads like a clunky and precious literary exercise -- a creative writing class assignment that intermittently reveals glimpses of the Author's storytelling talents, but too often obscures those gifts with self-important and ham-handed narrative pyrotechnics. -- Michiko Kakutani, The new York Times