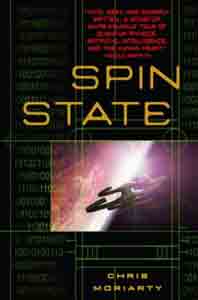 UN Peacekeeper Major Catherine Li has made thirty-seven faster-than-light jumps in her lifetime...and has probably forgotten more than most people remember. But that's what backup hard drives are for. And Li should know; she's been hacking her memory for fifteen years in order to pass as human. But no memory upgrade can prepare Li for what she finds on Compson's World: a mining colony she once called home and to which she is sent after a botched raid puts her on the bad side of the powers that be. A dead physicist who just happens to be her cloned twin. A missing dataset that could change the interstellar balance of power and turn a cold war hot. And a mining ...accident... that is starting to look more and more like murder...

Suddenly Li is chasing a killer in an alien world miles underground where everyone has a secret. And one wrong turn in streamspace, one misstep in the dark alleys of blackmarket tech and interstellar espionage, one risky hookup with an AI could literally blow her mind.

It took me about two pages into my advance reader's copy, without the Stephen Youll cover to frame the work, to decide that Chris was a talent to be reckoned with and Spin State a Book to be recommended. -- Ernest Lilley, SFRevu