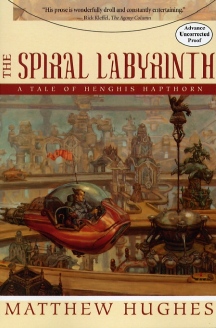 Synopsis of The Spiral Labyrinth

It was bad enough when Henghis Hapthorn, Old Earth's foremost discriminator and die-hard empiricist, had to accept that the cosmos was shortly to rewrite its basic operating system, replacing rational cause-and-effect with detestable magic. Now he finds himself cast forward several centuries, stranded in a primitive world of contending wizards and hungry dragons, and without his magic-savvy alter ego. Worse, some entity with a will powerful enough to bend space and time is searching for him through the Nine Planes, bellowing "Bring me Apthorn!" in a voice loud enough to frighten demons.

Reviews of The Spiral Labyrinth

Anyone who enjoys not only Vance's language and humor but also that of S.J. Perelman and P.G. Wodehouse will find Hughes a fit companion. -- Paul Di Filippo, Scifi.com