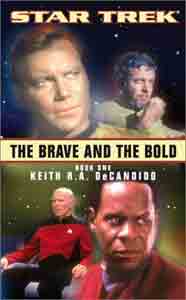 Star Trek: The Brave and the Bold

Synopsis of Star Trek: The Brave and the Bold

The Malkus Artifacts: four deadly machines, wielded as weapons of absolute power by an interstellar tyrant thousands of years ago and scattered across the Alpha Quadrant when he was overthrown. After their existence was discovered in 2151 by Captain Jonathan Archer of the Starship Enterprise..., all Starfleet vessels were warned to keep an eye out for these most dangerous devices...

One hundred years later, Captain James T. Kirk of the U.S.S. Enterprise and Commodore Matt Decker of the U.S.S. Constellation come across the first artifact on the colony world of Alpha Proxima II -- a world ravaged by a mysterious plague. As the crews of the two mighty vessels work to find a cure and locate the artifact, two brave captains must bring order to Proxima before it's too late!

One hundred years after that, Commander Benjamin Sisko of Station Deep Space 9... enlists the aid of Captain Declan Keogh of the U.S.S. Odyssey to help construct a farming colony on Bajor's second moon -- but the colony is placed in jeopardy when the Bajoran terrorist Orta discovers the second artifact and threatens destruction on a massive scale!

CONTINUING THE ALL-NEW ADVENTURE SPANNING ALL OF STAR TREK... HISTORY!

Two of the Malkus Artifacts -- used as deadly weapons millennia ago -- have been uncovered since their discovery in the 22nd century. Now in the 24th century, two more artifacts lie in wait, ready to wreak havoc on an unsuspecting galaxy...

While on their shakedown cruise, Captain Kathryn Janeway and the Starship Voyager... discover the third artifact in the Demilitarized Zone -- in the hands of the Maquis! With the aid of Captain Robert DeSoto of the U.S.S. Hood, Voyager security chief Lieutenant Tuvok infiltrates the Maquis, and must gain the trust of cell leaders Chakotay and Cal Hudson before the terrorists use the artifact to throw the DMZ into chaos!

When the final artifact is unearthed on Narendra III, it leads to several mysterious disappearances throughout Federation and Klingon... space -- including Federation Ambassadors Spock and Worf. Captain Jean-Luc Picard of the Starship Enterprise... joins forces with Captain Klag of the I.K.S. Gorkon -- but even the greatest vessels of two nations may not be enough when the deadly secret of the final artifact is revealed!

Reviews of Star Trek: The Brave and the Bold

At best I would say these two Books are an interesting exercise in filling in the middle bits of stories ignored by the TV programmes. -- Iain Saunders, The Alien Online