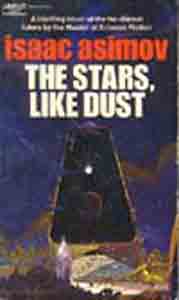 The "Rebellion World" was man's last outpost for survival...

Half a century before, the Nebular Kingdoms had been conquered by the cruel and domineering Tyranni, the war lords of Tyrann.

Now Biron Farrill's father had disappeared and Biron himself was marked for murder. He knew that his enemies were backed by the Tyranni. And that they were responsible.

But why had he and his father been singled out for destruction?

The answer takes him through the cosmic reaches of the galaxies. It becomes a quest for the "Rebellion World"-the hidden planet that shelters a conspiracy against the Tyranni and holds the only hope of peace for man's future.

The quest is a dangerous one.

...The Stars Like Dust is one of Asimov's most disappointing and dated science fiction novels. -- Simon McLeish

Asimov considered this his worst novel, and one is forced to agree. -- John H. Jenkins, Jenkins... Spoiler-Laden Guide to Isaac Asimov

...taken as featherweight escapist entertainment, the novel is a romp, and one can chalk up cheesy dialogue, outmoded science, and the fact that the plot resorts to the obvious more than it should as artifacts of its age. -- T. M. Wagner, SFReviews

It's not the best Asimov, but even mediocre Asimov is worth reading in my opinion. -- Jandy's Reading Room