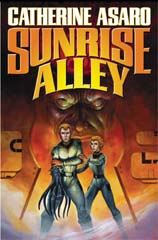 When the shipwrecked stranger washed up, nearly drowned, on the beach near research scientist Samantha Bryton's home, she was unaware that he was something more than human: an experiment conducted by Charon, a notorious criminal and practitioner of illegal robotics and android research. The man said his name was Turner Pascal-but Pascal was dead, killed in a car wreck. Charon is experimenting with copying the minds of humans into android brains, implanted in human bodies to escape detection, and plans to make his own army of slaves that will follow his orders without question. Samatha and Turner quickly found themselves on the run across the country, pursued by the most ruthless criminal of the twenty-first century. In desperation, Samatha decided to seek help from Sunrise Alley, an underground organization of AIs and androids that had gone rogue. But these cybernetic outlaws were rumored to have their own hidden agenda, not necessarily congruent with humanity's welfare, and Samatha hoped that her only hope would not prove a forlorn one. . . .

This near-future tale, while still featuring Asaro's signature focus on a competent yet lovelorn female who finds a perfect mate in the most unlikely situation, is a valuable addition to the canon of SF that asks the question "What makes us human?" -- Paul Di Filippo, Scifi.com