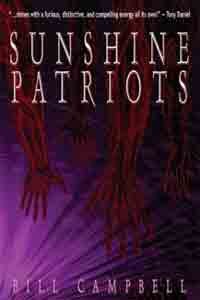 Rebellion erupts on the "paradise" planet of Elysia, plunging the colony into chaos. In response, the all-powerful United Earth dispatches its elite corps of cyborg soldiers, led by Aaron "The Berber" Barber. For a hero celebrated galaxy-wide for his acts of bravery against alien hordes, a ragtag group of colonized miners with antiquated weapons should be no challenge. But Barber and his soldiers are unprepaed to meet the most dangerous enemy yet--humans just like them. And on Elysia, the soldiers discover dangers that neither United Earth nor the Elysians themselves could have foreseen. The secrets Barber and his soldiers uncover lead them to question the true meaning of freedom in a world where nothing is what it seems.

'Sunshine Patriots' has a few nice touches mingled in with the bad but is not worth a read. -- Tomas L. Martin, SF Crowsnest

Unfortunately, this Book didn't aspire to any more than a bunch of soldiers shuffling around saying "we're screwed, let's get high", and seeming about as "in the real" as rubber muscles and gallons of fake blood. -- Josh Lehto, Shadow Play

...his new Book is sure to make a splash in the literary world. -- Jen Thomas, The Beacon

Rife with dystopian themes, Sunshine Patriots also reveals a wry and literate sense of humor (a lead character, the Jamaican war hero Aaron Edmund Barber, known as "the Berber," nominally evokes two of Shakespeare's most compelling villains), a sure ear for slang and the expressive richness of subculture, and an intriguing sociopolitical motivation. -- John Rodat, Metroland

I didn't want to put this one down. -- Dan L. Hollifield, Aphelion