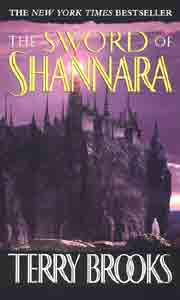 The Sword of Shannara

Synopsis of The Sword of Shannara

For all those who have been seeking something to read since they finished The Lord of the Rings, here is a wondrous new epic fantasy: The Sword of Shannara

Long ago the world of Shea Ohmsford was ruined by the wars of ancient Evil. Now mankind must compete for the Earth with many other races-- gnomes, trolls, dwarfs and elves. But Shea, the half-human, half-elven adopted son of an innkeeper, knows little of such troubles. Shady Vale, where he grew to manhood, seems a haven for peace.

Then into Shady Vale comes the giant, forbidding figure of Allanon, possessed of strange knowledge and even stranger Druidic powers. To Shea, he reveals that the evil Warlock Lord, supposedly long dead, is once again plotting to destroy the world. Against this Power of Darkness the sole effective weapon is the Sword of Shannara, which can be used only by a true descendant of Jerle Shannara. Shea is the last living heir: on him rests the hope of all races! When Shea protests that he is no hero, the Druid states that he must reclaim the Sword. In the morning Allanon is gone, leaving behind a mysterious warning note.

Soon a Skull Bearer, dread minion of the Warlock Lord, flies to the Vale, seeking to destroy the last heir of Shannara. Rather than risk destruction for the Vale, Shea and his skeptical half-brother Flick flee, drawing the Skull Bearer after them. Allanon's cryptic orders have directed them to Culhaven, home of the dwarfs. Somehow they must go there to await him, despite the Skull Bearers and other unknown, dire perils. And beyond Culhaven, they must enter the ravaged Northland, where the Warlock Lord holds total dominion.

Thus begins the seemingly hopeless quest of a simple man against the greatest power of evil the world has known. Valiant comrades join him against a host of foes and soul-wrenching dangers. Terrors and wonders increase as the overwhelming armies of the Warlock Lord move toward war. But in the end, Shea alone must confront the Lord of Evil without knowledge or hope to guide him.

The Sword of Shannara is that rarest of all novels--a truly believable, wholly satisfying wonderstory of epic fantasy. -- terrybrooks.net

Reviews of The Sword of Shannara

This novel is a must read for all fantasy fans. -- Alan, FutureFiction.com

THE SWORD OF SHANNARA is an enjoyable tale that follows the usual story. -- Toby's Land of Fantasy Book Reviews

Like Charles Dickens before him, Brooks is a man of many words. Many, many words. Where four or five would do, he uses twenty. This makes for very rich and vivid description, but it also makes for remarkably slow reading. -- Laurie Thayer, Rambles

There's a million things he could have done like that to lighten up the plot a little, make it more enjoyable, and just in general make the Book a true bestseller. -- Lisa's Book Reviews

This is Terry Brook's first Novel, and although a little slow at times, the story is very strong, with a very potent ending. -- Groz & Choccy's Virtual Home

I do not rank this Book very high, but I have read worse, much worse. -- Thomas Ros...n, Fantasy Webgroup