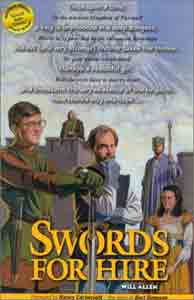 Swords for Hire: Two of the Most Unlikely Heroes You'll Ever Meet

Synopsis of Swords for Hire: Two of the Most Unlikely Heroes You'll Ever Meet

A new national award-winning children's Book, Swords for Hire is a funny, exciting story about the adventures of a young farm boy named Sam Hatcher, who lives in the ancient Kingdom of Parmall. Sam has lived a simple life on the farm with his parents, but all that changes the day he turns sixteen. He meets Rigby Skeet, a wisecracking guard, and the two uncover a plot that has captured the true king in a dungeon, where he is guarded by the very scary "Boneman."

They embark on an exciting search for King Olive, who was betrayed by his evil-and very strange-brother. Along the way they encounter evil guards, a magical sorcerer, and a beautiful girl being held captive. The story is somewhat similar in style to William Goldman's The Princess Bride. Vivid, funny characters, surprising plot twists, and twenty-four short, action-packed chapters make Swords for Hire a fun read for readers from age 9 to adult. It's a great confidence-builder for young readers that are intimidated by Harry Potter-length Books, and a great Book to read to a child at bedtime.

Although this is the first publication of Swords for Hire, the manuscript was written in 1979 by twenty-two year old Will Allen, who was terminally-ill with melanoma. Twenty-two years after Allen's death, his brother resurrected the manuscript and entered a printed draft in a national competition, where it won an award and the kudos, "Hilarious. . . fresh and exciting. . . a remarkable novel. . . funny, surprising, rich characters. . . a page-turner. . . Kids will dream of being Swords for Hire." The foreword was written by Nancy Cartwright, the Emmy award-winning voice of Bart Simpson.

Swords for Hire is an easy-to-read 168-page adventure that will have you laughing out loud, no matter what your age. It will be available nationally April 2003 for $6.95.

Reviews of Swords for Hire: Two of the Most Unlikely Heroes You'll Ever Meet

SWORDS FOR HIRE is a charming and funny, wholesome and entertaining story from beginning to end. -- Tree Klotzbach, Yet Another Book Review Site

This little tome could be the answer to getting away from the dull reality of the workplace during a week-load of those way too short coffee breaks that just leave you gasping for fresh air. -- Eva Wojcik-Obert, Fantasitca Daily