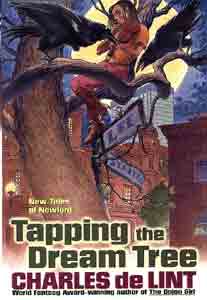 Synopsis of Tapping the Dream Tree

A brand-new installment in the Newford saga, the World Fantasy Award-winning Series of urban fantasy fiction by a master of the form.

Charles de Lint's urban fantasies, including Moonheart, Forests of the Heart, and The Onion Girl, have earned him a devoted following and critical acclaim as a master of contemporary magical fiction. At the heart of his work is the ongoing Newford Series, of which this is the latest volume.

The city of Newford could be any contemporary North American city . . . except that magic lurks in its music, in its art, in the shadows of its grittiest streets, where mythic beings walk disguised. And its people are like you and me, each looking for a bit of magic to shape their lives and transform their fate.

Now, in this latest volume, we meet a bluesman hiding from the devil; a Buffalo Man at the edge of death; a murderous ghost looking for revenge; a wolf man on his first blind date; and many more. We're reunited with Jilly, Geordie, Sophie, the Crow Girls, and other characters whose lives have become part of the great Newford myth. And De Lint takes us beyond Newford's streets to the pastoral hills north of the city, where magic and music have a flavor different but powerful still.

Reviews of Tapping the Dream Tree

Overall, de Lint fans should enjoy this collection and new readers should be able to get a fair picture of the range of his work. -- Victoria McManus, SFRevu

The stories are well written fantasies, but intended for the Newford crowd. -- Harriet Klausner, BooksNBytes

The Book is long and deep -- this is not a light read for a lazy afternoon, but you'll find the hours passed in de Lint's Newford to be time well spent. -- Tom Knapp, Rambles

I found myself savoring the stories even though a part of me wanted to plunge on and find out what happens next. -- BooksForABuck