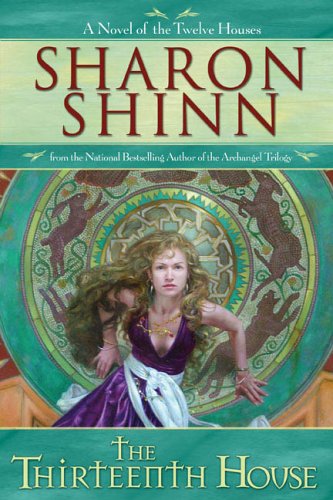 Synopsis of The Thirteenth House

The first Book of The Twelve Houses, Mystic and Rider, introduced readers to the troubled land of Gillengaria. Now, Sharon Shinn continues her epic tale, as a beautiful shapeshifter finds that intrigue and danger can be found even in the safest of havens...

After joining an unlikely band of soldiers and sorcerers to rescue the kidnapped regent Romar Brendan, the shiftling Kirra returns home to learn that her half-sister, Casserah, has been proclaimed heir to the land. But when Casserah refuses to go on a social tour of great Houses, Kirra shifts into her sister's form and makes the rounds-during which she unexpectedly meets up with her compatriots from her previous adventures. The motley group faces many dangers- and Kirra places herself in peril when she falls in love with the married Lord Romar. Revealing her true identity to him, Kirra begins a tempestuous affair that places them both in mortal danger, and leads them both into the stronghold of the devious lords of the Thirteenth House.

Reviews of The Thirteenth House

Readers who enjoy romance and strong characterization will enjoy this Book and The Twelve Houses Series. -- Sam Lubell, SFRevu

Ideal for readers who like a little romance with their fantasy. -- Kirkus, Reprinted on MonstersAndCritics.com