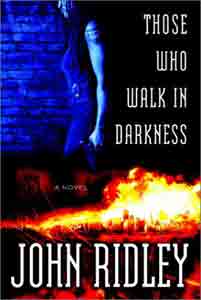 Those Who Walk in Darkness

Synopsis of Those Who Walk in Darkness

"Nightshift" was the first. A "metanormal," with a physiology and mental capacity far and above those of mere mortals. Somewhere he-It-was out there, stopping a bank robbery, a gang drive-by, keeping a kid from getting flattened by a runaway truck. . . Then came the others, literal superheroes whose remarkable exploits became so commonplace as to become mundane. There was Quadrupleman, Blue Knight, and the amazing Nubian Princess. But then came the bad ones, the metanormals who used their amazing genetic powers not for good but for evil. Pyrokinetics who could throw flames up to 40 feet. Shapeshifters. Telepaths. The amazing heroes who had protected society were being overrun by "muties" who could just as easily destroy it. There was Thrill Kill, Death Nell, and Headhunter. In response came the MTac squads, cops specially trained to fight the super-lethal enemies.

THOSE WHO WALK IN DARKNESS chronicles the adventures of MTac officer Soledad O'Roark. Since the destruction of San Francisco in a metanormal battle between the super-evil Bludlust and the virtuous Pharos, all genetic superhumans are seen as potential threats, all are on the hit list-by Executive Order-and it's up to MTac to stop them. But Soledad "Bullet" O'Roark has been taken off duty for using a homebrew piece-an unapproved weapon-to take out a pyro. She's stuck on patrol duty, when she should be out there hunting muties. Still, she manages to nab one-a miracle-working "angel" whose Telepath husband is now on a warpath. And there's nothing worse than a Telepath. With a serious threat of "freaks" teaming up in preparation for "the revelation," Mtac is up against the greatest threat since San Francisco bit the dust, and Soledad is reinstated just in time. Armed with her radical weapon and a new tattoo-WE DON'T NEED ANOTHER HERO-Soledad is ready to take vengeance for all her fallen comrades. But at the end of the day will this mutie-killing machine feel the same about these freaks? Are they all bad, or is there an eternal gray area that clouds the black and the white, so that we never know exactly where the line is between good and evil?

Reviews of Those Who Walk in Darkness

It reads like a graphic novel without the pictures. -- Mark Graham, Rocky Mountain News

Those Who Walk in Darkness is a fast, addictive read. -- Adam-Troy Castro, Scifi.com