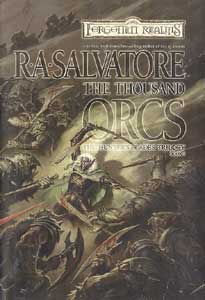 Synopsis of The Thousand Orcs

Barbaric hordes of blood-hungry humanoids sweep across the Spine of the World, and thousands of humans and dwarves lie in their path.

The Spine of the World has many defenders, not the least of whom are Drizzt Do'Urden and his powerful friends. But the Companions have grown dependent on one another. When they're separated by enemies, time, and death, can even a warrior as cunning and mighty as Drizzt stand alone against an army?

One of the greatest characters of the fantasy genre returns to the front lines and is drawn beyond, deep into enemy territory. He'll need every ounce of skill and courage he posesses just to stay alive.

Reviews of The Thousand Orcs

This was an excellent Book overall and I'd recommend it to anyone who are fans of Drizzt and co. -- William Smith, Loss For Words

This is the seventh Book I have read by R.A. Salvatore. Every one of those Books I have enjoyed greatly. -- Conan Tigard, The Reading Nook

The Thousand Orcs is yet another masterpiece by R.A. Salvatore. -- Matthew Desmond, Just RPG

Any new readers to the Drizzt Series need to start at the beginning with The Crystal Shard or you just wont appreciate this novel...which is the way it should be! -- Rob "Gutterbug" Evans, Fanplex

Like many Wizards of the Coast novels, THE THOUSAND ORCS has something of the feel of a role-playing adventure -- BooksForABuck.com

R.A. Salvatore has created another masterpiece, a story that moves and excites. -- Rod Deloe, Fantastica Daily