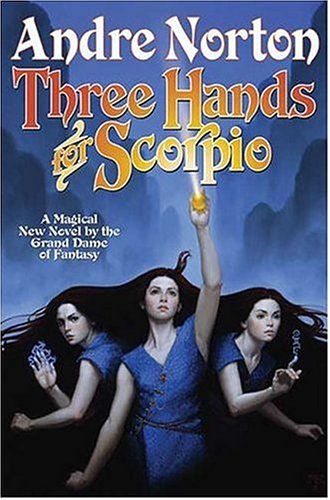 Synopsis of Three Hands for Scorpio

Andre Norton, the celebrated Author of Witch World and many other fantasy adventures, offers a new novel unique among her works, set in a realm not dissimilar to northern England in the sixteenth century: also, the Dismals of Northern Alabama are the model for part of the exotic setting.

Drucilla, Sabina, and Tamara, identical sisters born to Desmond, Earl of Skorpys, understand the price of being princesses in a realm bordered by fractious neighbors. For generations their land has been plagued by incursions, raiding parties, and more serious conflicts with Gurlyon, the land to their North. But when these three plucky young ladies are kidnapped as part of a plot to undermine their father's domain, they are taken to a mysterious realm where they experience terrors unlike anything they could imagine.

Their captors, fearing pursuit, thrust the princesses into a deep recess in a bizarre underworld called the Dismals. Once there, they must fend off hideous creatures, and a young man who claims to be lord of this dark, forbidding realm. Not sure whether he is friend or foe, they must depend on their wits, on each other, and on the mind-link that binds them together. Only thus can they escape the bizarre nether-realm they must roam in search of a way home.

Their travails test them in ways they cannot foresee, both physically and magically. Powerful forces work against them, but together they may yet escape, and help right the wrong that brought them to the strange realm in the first place.

Reviews of Three Hands for Scorpio

As a capstone to the edifice of her career, it is not unambitious or utterly unsuccessful. But it is hardly her strongest work, nor will it change the shape of her oeuvre. -- Paul Di Filippo, Scifi.com