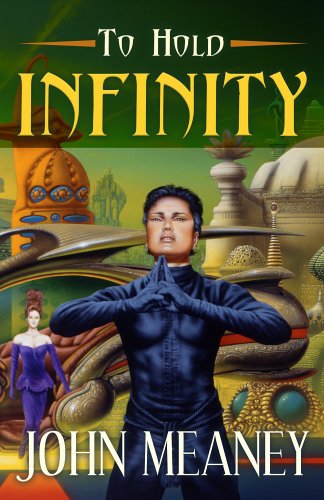 Synopsis of To Hold Infinity

Devastated by her husband's death, Earth-based biologist Yoshiko Sunadomari journeys to the paradise world of Fulgar to see her estranged son in the hope of bridging the gulf between them. But Tetsuo is in trouble. His expertise in mu-space technology and family links with the mysterious Pilots have ensured his survival'so far. Now he's in way over his head...unwittingly caught up in a conspiracy of illegal tech-trafficking and corruption, and in the sinister machinations of one of Fulgar's ruling elite: the charismatic Luculentus, Rafael Garcia de la Vega. When his home is attacked, Tetsuo flees to the planet's unterraformed wastes, home to society's outcasts and eco-terrorists. So Yoshiko arrives on Fulgar to discover Tetsuo gone...and wanted for murder. Ill at ease in this strange, stratified new world seething with social and political unrest but desperate to find her son and clear his name, she embarks on a course of action that will bring her face to face with the awesome, malevolent mind of Rafael.

Reviews of To Hold Infinity

Episodic in form, Meaney's novel, written in short sections, smacks of MTV and some frantic, quick-cut movie makers, shifting from character to character and place to place -- Mel Jacob, SFRevu

...while I found To Hold Infinity interesting -- certainly worth reading -- I thought it more a promising first novel than a Book worthy of being shortlisted for the best novel of the year -- any year. -- Rich Horton, SFSite

Mr. Meaney should have a fine career ahead of him. -- Cheryl Morgan, Emerald City

Undoubtedly, there is some hidden metaphor here and probably worth spending a week of your time reading but a lot more could have been done in raising this novel to a more classic proportion. -- Geoff Willmetts, SFCrowsNest