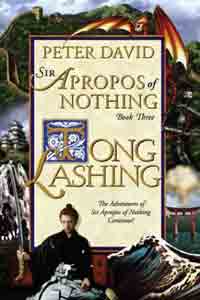 Tong Lashing : The Continuing Adventures of Sir Apropos of Nothing

Synopsis of Tong Lashing : The Continuing Adventures of Sir Apropos of Nothing

He's back. Sir Apropos of Nothing, the best reviewed anti-hero in modern fantasy makes his triumphant return and gets a severe "Tong Lashing" for his troubles.

Yes, the hero who reviewers have described as "Swiftian" -- Locus, "Schopenhauerian" -- Kirkus and "Cyclopian" -- Kirkus again -- and many other big words, has survived the events in his previous outing, The Woad to Wuin, events that would have killed a lesser man. Which is impressive considering it's hard to find a lesser man than Apropos: A con man, a knave, a scalawag...and those are his finer points.

This time out, Apropos finds himself out to sea...literally. Yes, our rogue knight winds up adrift in hostile waters after a "friendly" game of chance with a wizard turns ludicrously deadly. But once again Death is thwarted (or perhaps it simply wants nothing to do with him) as Apropos winds up a stranger in a strange land. A land called "Chinpan," populated by people who speak a different language and live by a code of honor, neither of which Apropos can comprehend.

And yet in Chinpan, Apropos slowly begins to examine his life and question whether he can aspire to true greatness. To become more than the hard-bitten cynic he's always been. He may yet be able to find a happy ending among a gentle people who are willing to accept him, faults and all. And he acquires a teacher who may even be able to set him on a road to true enlightenment.

But events conspire to pull Apropos in unexpected and dangerous directions. For his presence in Chinpan does not go unnoticed. What does the mysterious criminal organization known as the Forked Tong want with him? How do their plans tie in or conflict with the criminal Skang Kei family, and their enigmatic leader, Skang Kei Ho? What of the Mingol hordes? And what will be the fate of the Chin clan, including Double Chin, Cleft Chin, Kit Chin, and little Kit Chinette?

By turns hilarious and tragic, Tong Lashing leaves no signature moment of adventure unpummeled. Mysterious shadow warriors, demented rulers, martial arts lessons, ritual suicide...all that fun stuff and much more in this, the latest (and last?) adventure of Sir Apropos of Nothing.

Reviews of Tong Lashing : The Continuing Adventures of Sir Apropos of Nothing