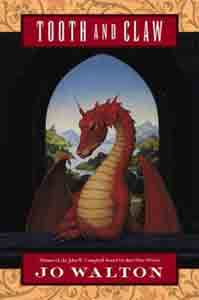 Synopsis of Tooth and Claw

A tale of contention over love and money...among dragons

Jo Walton burst onto the fantasy scene with The King's Peace, acclaimed by writers as diverse as Poul Anderson, Robin Hobb, and Ken MacLeod. In 2002, she was voted the John W. Campbell Award for Best New Writer.

Now Walton returns with a very different kind of fantasy story: the tale of a family dealing with the death of their father, of a son who goes to law for his inheritance, a son who agonizes over his father's deathbed confession, a daughter who falls in love, a daughter who becomes involved in the abolition movement, and a daughter sacrificing herself for her husband.

Except that everyone in the story is a dragon, red in tooth and claw.

Here is a world of politics and train stations, of churchmen and family retainers, of courtship and country houses...in which, on the death of an elder, family members gather to eat the body of the deceased. In which society's high-and-mighty members avail themselves of the privilege of killing and eating the weaker children, which they do with ceremony and relish, growing stronger thereby.

You have never read a novel like Tooth and Claw.

Reviews of Tooth and Claw

A bit old fashioned but the whole concept of the Book is old-fashioned with a little fantasy twist, not for everybody maybe but I liked it. -- Rachel Broome, SF Crowsnest