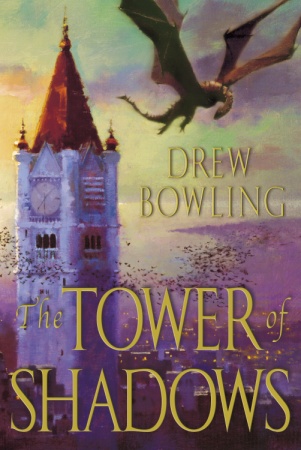 The Tower of Shadows

Synopsis of The Tower of Shadows

From the boundless imagination and talented pen of a young storyteller springs the fabulous first novel in a major new epic fantasy Series. Steeped in the traditions of its classic forebears, yet boldly original in its vision and sense of wonder, The Tower of Shadows swells with heroism, sings with enchantment, and carries the reader at full gallop into a marvelously wrought world of breathtaking adventure.

Untold ages ago, vainglorious spirits battled with the three gods in a bid for dominion over all...only to be defeated and banished below the earth to fester in their unquenchable evil. One of these vengeful demons eventually broke free and rained bloody death upon an innocent village in the land of Ellynrie. Few survived. The Starcross brothers, mere children orphaned by their parents... slaughter, suffered very difficult fates. Corin Starcross was delivered to safety by the wizard Dale, while his brother, Cade, was abandoned to the flames that devoured their childhood home. Likewise, the mercenary Wren Tident saved his infant daughter, Kayla, from the monstrous fate that claimed her mother. When the demon retreated to its black abyss, the haunted souls left in its murderous wake did their best to carry on'save for one, who vowed retribution.

When Cade Starcross reappears, he immerses himself in a secret study of the blackest arts, and a grim dance of destiny begins. His humanity withered by grief and his mind twisted by his apprenticeship to darkness, Cade seeks to use sorcery to wreak vengeance on his demon nemesis. But in order to succeed, a dagger of unearthly power wrought by the gods themselves must be found. And the blood of Cade's brother, Corin Starcross, must be spilled.

Yet all of Cade's fury and magic will prove no match for the evil set free upon the earth. By any means and at all costs, the doomed vendetta must be stopped. A fledgling wizard, a tormented warrior, and a young girl burning with her father's untamed spirit must rally together as the only hope of a world poised perilously at the abyss.

Reviews of The Tower of Shadows

like Dungeons & Dragons meets The Wheel of Time, but with added touches of horror, at which the Author excels. -- Hilary Williamson, Bookloons