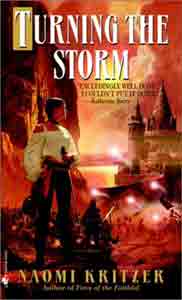 Synopsis of Turning the Storm

She is called musician, rebel, soldier, legend. After months of leading an uprising against the treacherous religious order of the Fedeli and the ruling Circle of Mages, young Eliana is known throughout the land. Striking from the blighted wastelands, her army of reformers has grown in number--adding liberated slaves to its ranks. Driven by their beliefs in the Old Way, Eliana and the soldiers of the Lupi stand on faith alone.

But faith won't save the Lupi from traitors in their midst--or from the magical fires of the mages. Seeing her soldiers reduced to ashes around her, Eliana takes a desperate gamble: she steps down from command. Then, armed with stolen orders to attend one of the musical ensembles within the Imperial enclave, she disguises herself as a boy, takes up her violin, and heads straight into enemy territory. And now the girl-turned-general adds another title to her rank: spy.

Reviews of Turning the Storm

TURNING THE STORM is a mega action-packed fantasy tale that never slows down until the final battle is done. -- Harriet Klausner, AllScifi.com