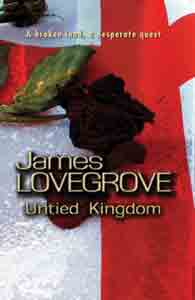 After a Series of disasterous political decisions the United Kingdom has finally fallen foul of the International Coummunity. Ostracized and bombed at random the country has fallen apart. With the infrastructure in ruins tiny communities struggle on relying on ancient traditions and myth for their structure and identity. In the village of Downbourne the mayor has styled himself the Green Man. But even he is powerless to stop a raid on the village by a London based gang who kidnap a number of the village's women. One of them is the schoolmaster's wife. Their marriage was an arid disaster but the schoolmaster feels bound to do the right thing and sets off on a journey through an England at once terrifying and magical to get her back. But does this particular damsel even want to be rescued?

This is a very well thought-out novel, with some elegant and pin-point writing. -- Keith Brooke, Infinity Plus

A missed opportunity from a writer who could do far better. -- Paul Skevington, SFCrowsnest

A definite four stars out of five. -- John Berlyne, SFRevu