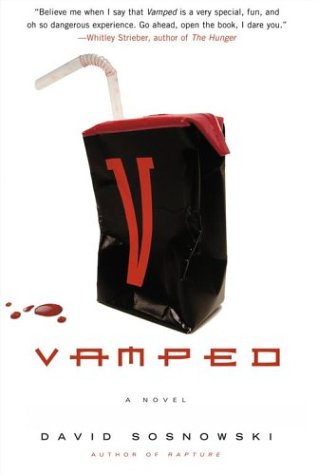 Martin Kowalski is an eighty-year-old man stuck in a twenty-year-old body. He works the graveyard shift. He has a poster of Bela Lugosi on his wall and a box of uneaten Count Chocula in his pantry. He drinks stem-cell-derived blood from cleverly packaged and marketed juice boxes. He is, in short, a vampire. But since his wildly successful scheme to turn as many mortals as possible into vampires -- "vamp" them rather than kill them -- resulted in a new immortal majority, Marty finds little of interest to fill his countless days.

From the deeply imaginative mind of David Sosnowski -- who gave us the critically acclaimed junkie-angel classic Rapture -- bursts this neo-vampire novel studded with pint-size vampires known as "screamers" (children who were vamped and are none too happy about it); priest vampires who helped convert their flock into lifetime members of the Church; stripper vampires who lap-danced their way into customers' veins; and one very small, very outspoken human girl.

When Marty decides to end his endless life of soul-crushing ennui -- call it vampire affluenza -- a three-foot blond obstacle is thrown in his path: Isuzu Trooper Cassidy, a refugee from a human hunting preserve. At first he thinks "midnight snack," but before the sun comes up, Isuzu is the one snacking on his prized cereal collection as she charms him into staying undead long enough to raise her in a world rife with danger and almost entirely populated by vampires yearning for the taste of real human blood.

The critics applauded David Sosnowski when Rapture was published, saying he "staked out a patch of turf somewhere between Franz Kafka and Douglas Adams." Now with Vamped, Sosnowski takes on a time-honored genre and breathes new life into it by turning Martin Kowalski's vampire world upside down and telling his story with rich, masterful, and frequently hilarious prose.

From eBay to sex to smiles, Sosnowski has imagined his world in impressive detail. -- Cynthia Ward, Scifi.com