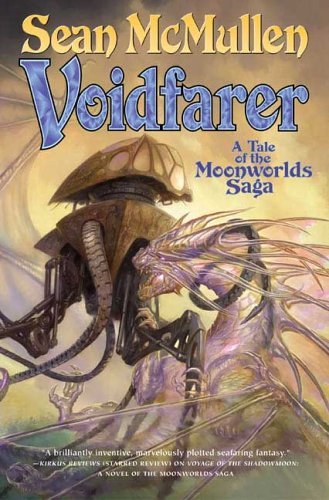 At first Wayfarer Inspector Danolarian thought the huge oval thing that had fallen from the sky was a dragon's egg. When it opened, however, he knew that it was much, much worse. His world was being invaded by pitiless sorcerers from Lupan, who could sweep whole armies aside, and even defeat the invulnerable glass dragons. Surrender or flight were the only options ... but not for Inspector Danolarian, his Wayfarer Constables, and his sweetheart, the sorceress Lavenci.Although Danolarian is no sorcerer, he's no ordinary Wayfarer either. Faced with civilization crumbling around him, and organized resistance shattered by the invincible magic of the Lupanians, he chances upon an unlikely ally and begins to fight back. It won't be easy, for he has to rally the demoralized sorcerers of Alberin, organize its terrified citizens, stay one step ahead of his own past, and, most importantly, survive a dinner party with Lavenci's mother.

Voidfarer is still far above the typical fantasy novel and science fiction fans who do not like fantasy will find it well worth reading just for the twists on H.G. Wells. -- Sam Lubell, SFRevu

With more science fiction than the previous two tales yet still loaded with fantasy elements (just ask Scyverin on unrequited love), fans of the Series or Wells will want to read the Moonworlds' version of the War of the Worlds. -- Harriet Klausner, The Best Reviews

I think McMullen was going for the exotic swashbuckling of L. Sprague deCamp's Zei Books. But instead we get Wells rewritten by the auteurs of Spamalot. -- Paul Di Filippo, Scifi.com