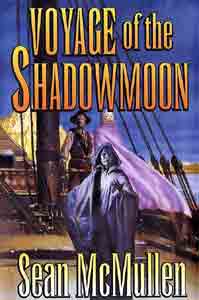 Voyage of the Shadowmoon

Synopsis of Voyage of the Shadowmoon

Now McMullen delivers Voyage of the Shadowmoon, a fantasy epic of daunting skill and scope. The Shadowmoon is a small, unobtrusive wooden schooner whose passengers and crew are much more than they seem: Ferran, the Shadowmoon's lusty captain who dreams of power; Roval, the warrior-sorcerer; Velander and Terikel, priestesses of a nearly extinct sect; and the chivalrous vampire Laron, who has been trapped in a fourteen-year-old body for seven hundred years.

They sail the coast, gathering useful information, passing as simple traders. But when they witness the awful power of Silverdeath, an uncontrollable doomsday weapon of awesome destructiveness, they realize they must act. But every single king, emperor, and despot covets Silverdeath's power. It will take all of their wits and more than a little luck if they hope to prevent one of these power-hungry fools from destroying the world. Their only advantage? The Shadowmoon.

While it seems to be little more that a small trading vessel--too small for battle, too fat for speed-it is actually one of the most sophisticated vessels in the world, one that allows them to travel to places where no others would dare. They can only hope it will be enough to save them all before Silverdeath rains destruction across their entire world.

Reviews of Voyage of the Shadowmoon

It is a Generic Fantasy, but with enough interesting twists that it was still worth reading. -- Mark L. Olson, The New England Science Fiction Association, Inc.

VOYAGE OF THE SHADOWMOON is simply great... -- Harriet Klausner, Under the Covers