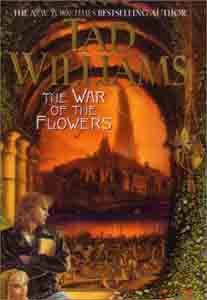 The War of the Flowers

Synopsis of The War of the Flowers

Returning to the fantasy genre that made him a coast-to-coast best-selling phenomenon, Tad Williams has written a new stand-alone contemporary novel set in Northern California-and also in the strange parallel world that coexists in the farthest reaches of the imagination.

Theo Vilmos is a thirty-year-old lead singer in a not terribly successful rock band. Once, he had enormous, almost magical, charisma both onstage and off-but now, life has taken its toll on Theo. Hitting an all-time low, he seeks refuge in a islolated cabin in the woods-and reads an odd memoir written by a dead relative who believed he had visited the magical world of Faerie. And before Theo can disregard the account as the writings of a madman, he, too, is drawn to a place beyond his wildest dreams...a place filled with be, and has always been, his destiny.

Reviews of The War of the Flowers

For all the faults in its execution, The War of the Flowers is worth the good week or so you...ll need to get through it. -- John Berlyne, SFRevu

'the War Of The Flowers... is an ideal Book for both new and established Williams readers. -- Paul Skevington, SF Crowsnest