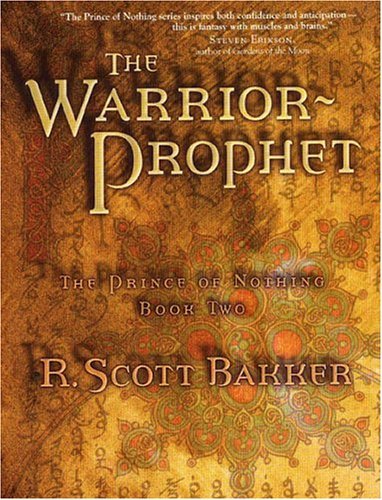 Synopsis of The Warrior Prophet

The first battle against the heathen has been won, but while the Great Names plot and squabble over the spoils, Kellhus patiently extends his influence, drawing more followers to his banner. The sorcerer Achamian and his lover, Esmenet, submit entirely, only to have their faith tested in unimaginable ways. The warrior Cnaiur falls ever deeper into madness. The skin-spies of the Consult watch with growing trepidation. And as the vast host of the Holy War endures its sternest test in the searing wastes of the desert, a name - a title - begins to be whispered amongst the faithful. But who is the Warrior-Prophet: a dangerous heretic, who turns brother against brother? Or the only man who can avert the Second Apocalypse? The Holy War stands on a knife edge. If all is not to be lost the great powers will have to choose between their most desperate desires and their most ingrained prejudice. Between hatred and hope. Between the Warrior-Prophet and the end of the world...

Reviews of The Warrior Prophet

The ambition and erudition of this Book are astonishing... but what does it actually accomplish? We worry for its longevity. -- Inchoatus

The second novel in R. Scott Bakker's The Prince of Nothing saga continues to push the envelope in terms of complexity and tension. -- Rob H. Bedford, SFFWorld.com

The Warrior-Prophet doesn't always escape the narrative traps of epic fantasy, but it's packed full with other good stuff. -- James Schellenberg, Challenging Destiny

The Warrior-Prophet is a demanding work, but, unlike so many other Books of its kind, it really does pay off the reader's effort. -- T. M. Wagner, SFReviews

If you want to know how to do volume two well I recommend that you read The Warrior Prophet, part two of the Prince of Nothing Series, by R. Scott Bakker. -- Cheryl Morgan, Emerald City

The Warrior Prophet is a good Book; with more stringent editing, it could have brilliant. That said, it still leaves most of the competition trailing. -- Jon Courtenay Grimwood, The Guardian