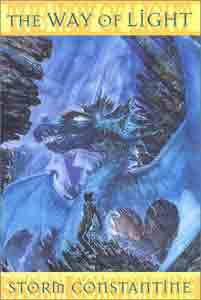 The Way of Light (The Chronicles of Magravandias, Book 3)

Synopsis of The Way of Light (The Chronicles of Magravandias, Book 3)

In the final part of Storm Constantine's riveting fantasy of politics and magic, the Carodorean Valraven Palindrake, Dragon Lord of the empire's armies, must undergo terrible trials if he is to finally achieve the destiny he was born for and women through the centuries have schemed for - but nothing comes easy in this land of feuds and bitter revenge... The Chronicles of Magravandias have been hailed as a breathtaking new fantasy by a major British talent.

In the Magrast, the capital of the Magravandian Empire, the emperor Leonid Malagash lies dying. His warring sons wait in the background to fight for the throne against the legitimate heir, Price Gastern.

Valraven Palindrake, Dragon Lord of the imperial army, concerned only with keeping his family safe in these precarious times, has vowed to support Gastern. But other people, in secret cabals across the world, have different ideas, and see Valraven as the obvious champion to overthrow the rule of the decadent Malagashes. He is the Sea Dragon Heir of mystical Caradore, the only man in power fit to wear the ancient Crown of Silence that embodies all the best qualities of a true king.

While Valraven devotes himself to keeping order in Magrast in the run-up to Gastern's coronation, his wife Varencienne and his daughter Ellony are kidnapped by the magus Taropat and his apprentice Shan, who are opposed to either Valraven or any of the Malagashes taking the throne.

As the new emperor goes slowly insane, tormented by horrific visions, Valraven is, slowly but surely, forced to face up to the dreams that others have invested in him.

And the great dragons of old, who rule the elements, are woken from their timeless sleep, as the eternal conflict between Foy, the Sea Dragon Queen of Caradore, and Efrit, Lord of the Magravandian Firedrakes, is played out through human avatars.

Reviews of The Way of Light (The Chronicles of Magravandias, Book 3)

The final novel in Storm Constantine's powerful Chronicles of Magravand ias fantasy trilogy, THE WAY OF THE LIGHT, is a thrilling tale. -- Harriet Klausner, Under the Covers

In the end, too much remains attenuated, and the story is only partly successful as adventure, and never completely thought-provoking in terms of its content. -- William Thompson, SF Site