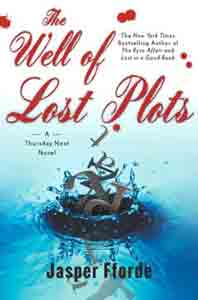 The Well of Lost Plots: A Thursday Next Novel

Synopsis of The Well of Lost Plots: A Thursday Next Novel

The eagerly anticipated third installment in the bestselling Thursday Next Series ... a genre-bending blend of crime fiction, fantasy, and top-drawer literary entertainment! Thursday Next definitely needs some down time. After two rollicking New York Times bestselling adventures through the Western literary canon, Britain's Prose-Op is literally and literaturally at her wits' end ... not to mention pregnant. Her job as Miss Havisham's apprentice at Jurisfiction is as hectic as ever ... and not just because she has to moderate rage counseling sessions in Wuthering Heights. So what could be more welcome than a restful stint in the Character Exchange Program down in the hidden depths of the Well of Lost Plots?

She's supposed to relax while filling in for a sidekick in an unpublished (and unpublishable) detective procedural socked away below the Great Library in the Well of Lost Plots. But a vacation remains elusive. In no time, Thursday discovers that the Well of Lost Plots is a veritable linguistic free-for-all where grammasites run rampant, plot devices are hawked on the black market, and lousy Books (like the one she has taken up residence in) are scrapped for salvage. To top it off, a murderer is stalking Jurisfiction personnel and nobody is safe, least of all Thursday herself.

Fforde has done it again in this absolutely brilliant feat of literary showmanship. When it comes to sheer wit, literate fantasy, and effervescent originality, nobody can touch this new tour de Fforde.

Reviews of The Well of Lost Plots: A Thursday Next Novel

A free-wheeling plot spirals exhilaratingly out of control. -- David Robson, The Telegraph

I'm not sure this is a Book to distract you from the troublesome intelligence that your house is burning down, but I can see why its Author has attracted a cult following. -- Murrough O'Brien, The Independent

This is Fforde at his smartest, silliest best, confirming he can keep up the momentum he built in The Eyre Affair and its sequel, Lost in a Good Book. -- Keith Austin, The Sydney Morning Herald

In many ways, The Well of Lost Plots is a far more ramshackle novel than its predecessors, with a hasty finale and the convenient introduction of a deus ex machina. -- Michael Dirda, The Washington Post

While Fforde's third novel is his weakest to date, it's by no means destined to be demolished and tossed into the Text Sea. -- Susan Scribner, The Romance Reader

A complex plot, an imaginative story line, a mesmerizing mystery, and a feisty heroine are just a few of the elements that make The Well of Lost Plots a 'must read' Book -- Rochelle Caviness, Large Print Review

...The Well of Lost Plots is a satisfying read, just not as much so as its predecessors. -- David Roy, Curled Up With A Good Book

WELL OF LOST PLOTS, like its two predecessors, demonstrates how alive and dynamic fiction can be, how a story can change from moment to moment, from one reading to another. -- Stephen M. Deusner, BookReporter

If there is a weakness in his work, it lies in the possibility that, over time, the jokes will wear thin. -- Robin Vidimos, The Denver Post

Although not for everybody, the third Thursday Next tale is a delightful satirical fantasy that tears into anything and everything. -- Harriet Klausner, BooksNBytes

It's almost as if Fforde is lost in his own antic imagination, and this Book has become a punch-line delivery device, rather than a coherent narrative on its own. -- Alix Wilber, The Seattle Times

This is the third in Fforde's "Thursday Next" adventures and - let's get it out of the way now - the poorest. -- Michael Larsen, The New Zealand Herald

At times the puns are so creaky you can almost hear the snare drum ta-dum-dum, and the action occasionally bogs down as Fforde rolls in the intricacies of his created world. -- Peggy McMullen, The Portland Oregonian

You would think Fforde would have run out of inside jokes about Books, but there are one or two gems on almost every page. -- John Freeman, The Cleveland Plain Dealer

The zany capering of her creator, whose imagination appears to be not so much fevered as on fire, has produced a Series of novels that pays homage to the Great Library of Books that have come before it, yet delivers a reading experience that is truly interesting, entertaining, and like no other. -- Kim Moritsugu, Toronto Globe and Mail

On the surface, The Well of Lost Plots isn't quite as enjoyable as the two previous novels as sheer entertainment, however it presents a depth to the world of Thursday Next which, while not absent from those Books, indicates that Fforde is attempting to write something more than mere entertainment. -- Steven H Silver, SF Site

My reactions ranged from a delighted grin of recognition to laughing aloud. -- Donna Scanlon, Rambles

Mr. Fforde has a wonderfully eloquent style and he clearly enjoys showing off, making him an ideal novelist. -- Sue Davies, SFCrowsnest