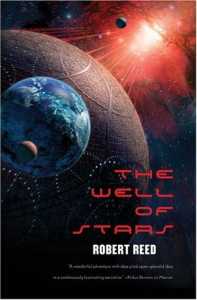 The Well of Stars

Synopsis of The Well of Stars

In The Well of Stars, Hugo award-nominated Author Robert Reed has written a stunning sequel to his acclaimed novel Marrow. The Great Ship, so vast that it contains within its depths a planet that lay undiscovered for generations, has cruised through the universe for untold billions of years. After a disastrous exploration of the planet, Marrow, the Ship's captains face an increasingly restive population aboard their mammoth vessel.

And now, compounding the captains' troubles, the Ship is heading on an irreversible course straight for the Ink Well, a dark, opaque nebula. Washen and Pamir, the captains who saved Marrow from utter destruction, send Mere, whose uncanny ability to adapt to and understand other cultures makes her the only one for the job, to investigate the nebula before they plunge blindly in. While Mere is away, Pamir discovers in the Ink Well the presence of a god-like entity with powers so potentially destructive that it might destroy the ship and its millions.

Faced with an entity that might prevent the Ship from ever leaving the Ink Well, the Ship's only hope now rests in the ingenuity of the vast crew . . . and with Mere, who has not contacted them since she left the Ship...

With the excitement of epic science fiction adventure set against a universe full of wonders, the odyssey of the Ship and its captains will capture the hearts of science fiction readers.

Reviews of The Well of Stars

If you enjoyed the first Book, then you'll probably get this one to complete your set but I can't help but feel that Robert Reed dropped himself into a hole as big as the black hole Marrow was heading for here and could have done a lot more here to bring more layers into this Book. -- GF Willmetts, SFCrowsnest

Establishing the context in which such super-science dazzlement can consort smoothly with mature evocations of character is the mark of a master writer, and Reed has certainly attained that status with this fine Book. -- Paul Di Filippo, Scifi.com