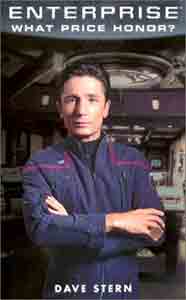 Synopsis of What Price Honor

The Starship Enterprise NX-01 is humanity's flagship -- the first vessel to begin a systematic exploration of what lies beyond the fringes of known space. Led by Captain Jonathan Archer, eighty of Starfleet's best and brightest set forth to pave humanity's way among the stars. Tempered by a year's worth of exploration, they are a disciplined, cohesive unit. But now one of their number has fallen.

Bad enough that Ensign Alana Hart is dead. Worse still that she died while attempting to sabotage the Enterprise -- and at the hands of Lieutenant Malcolm Reed, the ship's armory officer and her nominal superior. Even as questions swirl around Hart's death, Archer, Reed, and the rest of the Enterprise crew find themselves caught squarely in the middle of another tense situation- a brutal war of terror between two civilizations.

But in the Eris Alpha system, nothing -- and no one -- are what they seem. And before the secret behind Ensign Hart's demise is exposed, Reed will be forced to confront death one more time.

Reviews of What Price Honor

The Author and/or publisher has run into some incompatibilities somewhere over plausible dates for the mission, and they never do get sorted out properly, but just ignore that and read the Book, and it's totally acceptable TV tie-in fare. -- Mike McKeown, The Alien Online