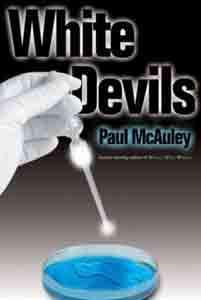 The Congo, roughly thirty years from now. Plague, civil war, and rampant genetic engineering have spawned widespread chaos and devastation throughout Africa. Nicholas Hyde is investigating a reported massacre in a remote corner of the Congo when his team is attacked by a band of fierce apelike creatures, possibly the result of illegal genetic experimentation on chimpanzees. Nick survives the encounter, only to discover himself at the center of a massive cover-up.Obligate, the supposedly eco-friendly transnational that now controls the Congo, denies the existence of the "white devils," and will stop at nothing to suppress all evidence to the contrary. Although Nick has secrets of his own to conceal, he becomes determined to uncover the origin of the mysterious creatures---and why certain individuals will kill to bury the truth.But even the atrocities he has already witnessed cannot prepare him for the terrifying secret of the white devils.

McAuley has served notice for the rest of the sf Books of 2004, this is the standard by which you will be judged. -- Steve Mazey, The Eternal Night

The Author entered far too much depth for my poor uneducated mind, leaving me speed-reading pages by the score, hunting desperately for some firm juicy chunks of steak, floating in an all-too present gravy ... -- Antony Wagman, SF Revu

This smart thriller took a tiny bit for me to get into, because McAuley often writes in the present tense, an unusual choice. -- Cindy Lynn Speer, Fantastica Daily

Everything that should be there appears to be present, but the sum is unfortunately considerably greater than the whole. -- Paul Skevington, SFCrowsnest