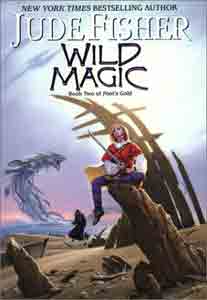 Book Two in Jude Fisher's acclaimed FOOL'S GOLD trilogy Magic has returned to Elda, creating all manner of wonders and terrors. None yet know that the source of this magic is the legendary Rosa Eldi, restored to the world, but not yet restored to herself. Unaware of her true nature, she has married King Ravn Asharson of the North, and now with usurpers and assassins circling she must conceive a child to establish the succession. In the Southern Empire, the fire of holy war is smouldering and violence is everywhere, fuelled by fundamentalist hatred and bigotry. Caught up in these machinations, peace-loving Saro Vingo is forced to take up arms against the North; and Virelai, apprentice sorcerer, finds himself chained to the murderous plans of his master, Tycho Issian. Ignoring his king's call to arms, Aran Aranson, chief of the Rockfall clan, is in the grip of a mad obsession borne of a magical map and dreams of sailing the frozen seas to Sanctuary, island of legend, to find a fortune. His daughter, Katla, dreams of sailing with him; but her fate lies elsewhere. All over Elda, forces are aligning themselves for good or for evil. There is magic in the world again, but it is wild and unpredictable, and few will count its touch a blessing.

It's not just a narrative, but a technical challenge to juggle so many stories and players without dropping or shortchanging at least a few of them, but Fisher manages this with great skill... -- Victoria Strauss, SF Site