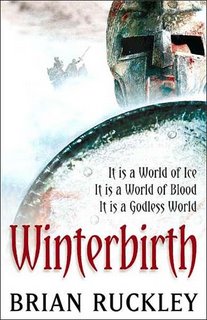 An uneasy truce exists between the thanes of the True Bloods.

Now, as another winter approaches, the armies of the Black Road march south, from their exile beyond the Vale of Stones. For some, war will bring a swift and violent death. Others will not hear the clash of swords or see the corpses strewn over the fields. They instead will see an opportunity to advance their own ambitions. But all, soon, will fall under the shadow that is descending.

For, while the storm of battle rages, one man is following a path that will awaken a terrible power in him -- and his legacy will be written in blood.

... maintains a timelessness and strangeness that make it enjoyable to read. -- John, Grasping for the Wind

...a confidently written, well plotted, excellently characterised tale, that needs a good level of concentration and a strong stomach - but leaves you wanting more with a lot of questions that just have to be answered in the next Book. -- Gav's Blog

...delivers a meaty (539 pages), dramatic, and entertaining debut that will please a lot of fantasy readers. -- Robert, fantasyBookcritic.blogspot.com

...not without it's flaws but if you persevere with it then I think you...ll be in for a treat of a read. -- Graeme Flory, Graeme's Fantasy Book Review

...an excellent first novel from an exciting new Author. -- gyrovagueness

If you are looking for another fine debut, Brian Ruckley's Winterbirth should not disappoint. -- Pat's Fantasy Hotlist

...another solid entry into the epic fantasy world. -- Neth Space

...a unique and intriguing world... -- Dave Martin, The Bookbag