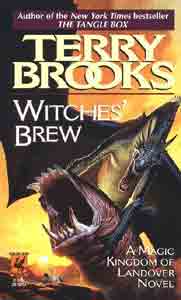 Former Chicago lawyer Ben Holiday was proud and happy. And why not? The Magic Kingdom of Landover, which he ruled as High Lord, was finally at peace, and he and his wife, the sylph Willow, could watch their daughter Mistaya grow.

And grow she did--shooting through infancy in months, learning to walk and to swim in the same week. Mistaya had been born a seedling, nourished by soils from Landover, Earth, and the fairy mists, come into being in the dank, misty deadness of the Deep Fell. With dazzling green eyes that cut to the soul, she was as lovely as her mother, and Ben wanted nothing more than to enjoy his daughter's childhood and his peaceful kingdom forever. But his idyll was interrupted when Rydall, a king of lands beyond the fairy mist, assembled armies on Landover's border and threatened to invade unless Ben was able to defeat Rydall's seven champions.

Some counseled the High Lord to refuse Rydall's challenge, but Holiday could not, for Mistaya had been snatched from her guardians by foul magic. And Rydall held the key to her fate...

Although generally entertaining, Witches' Brew is not one of Brooks' better efforts. -- Wendy Morris