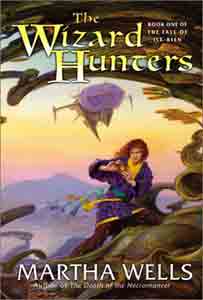 The Wizard Hunters : Book One of the Fall of Ile-Rien

Synopsis of The Wizard Hunters : Book One of the Fall of Ile-Rien

Reviewers nationwide, as well as fellow artists in the fantasy arena, have already marveled at the astonishing voice and vision of Martha Wells. With this, the first Book in an extraordinary new epic trilogy, the Nebula Award...nominated Author of The Death of the Necromancer and Wheel of the Infinite dazzles as never before -- bringing a stark and breathtaking reality to an imperiled world of magic. . . .

Ile-Rien faces the grim specter of its own imminent demise. Once a fertile and prosperous land, it is now under attack by the Gardier, a mysterious army whose storm-black airships appear from nowhere to strike without warning. Every weapon in the arsenal of Ile-Rien's revered wizards has proven useless -- their magic quickly identified by the enemy and rendered instantly impotent, their conventional arms spontaneously and inexplicably exploded. And the last hope of a magical realm under siege rests within a child's plaything.

The tiny sphere was created for Tremaine Valiarde's amusement when she was a child of twelve, presented to her by her uncle Arisilde, the greatest of all sorcerers. But the mage -- among the first to identify the impending Gardier threat, along with Tremaine's notorious father, Nicholas, and one of the first to die because of it -- secreted a power within the orb capable of defeating the invaders. And now, years later, it falls to a young woman lacking any magical knowledge and abil-ity to release it.

Tremaine's initial attempts have disastrous consequences, transporting her to a strange world far removed from anything she has ever experienced or imagined. In this terrible and wondrous place -- where primitive magic cultures lag far behind Ile-Rien's sophisticated sorcery, where noble warriors clash with dark wizards, where starving demons prowl for prey and the Gardier prepare their assaults -- Tremaine must somehow unlock the sphere's powerful secrets . . . before the slow and monstrous awakening of a hideous evil is complete.

Reviews of The Wizard Hunters : Book One of the Fall of Ile-Rien

Suffice it to say that readers will enjoy this visit to Ile-Rien and will look forward to Tremaine's next adventure. -- Gavin J. Grant, Bookpage

While this is both an opening volume and a sequel, Wells crafts a story abundant with magic and real characters, which stands on its own as a fine, compelling read. reading. -- Rob H. Bedford, SFFWorld

THE WIZARD HUNTERS opens strongly, but sags badly in the middle... -- BooksForABuck

Tremaine is a charming lead character in her reluctant and bumbling way. Her appeal, along with the dark, powerful villainy of the Gardier and the dire consequences they present, forms the foundation for a captivating trilogy that should satisfy most fantasy fans. -- Dan Bogey, The Pittsburgh Tribune-Review