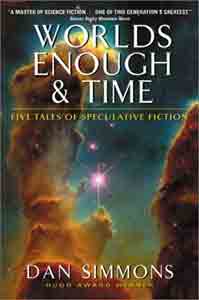 An extraordinary artist with few rivals in his chosen arena, Dan Simmons possesses a restless talent that continually presses boundaries while tantalizing the mind and touching the soul. Now he offers us a superb quintet of novellas -- five dazzling masterworks of speculative fiction, including "Orphans of the Helix," his award-winning return to the Hyperion Universe -- that demonstrates the unique mastery, breathtaking invention, and flawless craftsmanship of one of contemporary fiction's true greats.

* Human colonists seeking something other than godhood encounter their long-lost "cousins"...and an ancient scourge.

* A devastated man in suicide's embrace is caught up in a bizarre cat-and-mouse game with a young woman possessing a world-ending power.

* The distant descendants of a once-oppressed people learn a chilling lesson about the persistence of the past.

* A terrifying ascent up the frigid, snow-swept slopes of K2 shatters preconceptions and reveals the true natures of four climbers, one of whom is not human.

* At the intersection of a grand past and a threadbare present, an aging American in Russia confronts his own mortality as he glimpses a wondrous future.

Nothing poured out from the depths of Dan Simmons will ever be ordinary. Here's five chances to realise how truly extraordinary his words can be; don't let it slip by. -- Lisa DuMond, SFSite

The Author provides each of five stories with an original and highly worthwhile preface and the Book as a whole with one of the best introductions this side of Harlan Ellison. -- Paula Guran, Dark Echo Horror

If you want a good read, "On K2 With Kanakaredes" is worth your time but regretfully not the price of this Book. -- L.J. Anderson, Scifi Dimensions

Despite some uneven stories that may not interest all readers, WORLDS ENOUGH AND TIME can be recommended, if only for the endearing writing style of one of SF's strongest practitioners. -- Chris Wyatt, Cinescape

These stories, and the fifth piece, a film treatment called "the End of Gravity," will be mainly of interest to fans of Simmons and his eclectic body of work. -- Dan Bogey, The Pittsburgh Tribune-Review