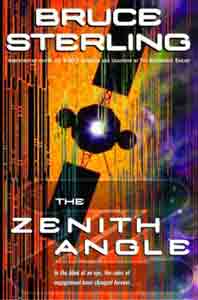 Synopsis of The Zenith Angle

Infowar. Cybercombat. Digital security and techno-terror. It's how nations and networks secretly battle, now and into the future. And for Derek ...Van... Vandeveer, pioneering computer wizard, a new cyberwarrior career begins on the fateful date of September 11, 2001.

Happily married with a new baby, pulling down mind-blowing money as a VP of research and development for a booming Internet company, Van has been living extralarge. Then the devastating attacks on America change everything. And Van must decide if he's willing to use the talents that built his perfect world in order to defend it.

...It's our networks versus their death cult,... says the government operative who recruits Van as the key member of an ultraelite federal computer-security team. In a matter of days, Van has traded his cushy life inside the dot-com bubble for the labyrinthine trenches of the Washington intelligence community...where rival agencies must grudgingly abandon decades of distrust and infighting to join forces against chilling new threats. Van's special genius is needed to make the country's defense systems hacker-proof. And if he makes headway there, he...ll find himself troubleshooting ultrasecret spy satellites.

America's most powerful and crucial ...eye in the sky,... the KH-13 satellite...capable of detecting terrorist hotbeds worldwide with pinpoint accuracy...is perilously close to becoming an orbiting billion-dollar boondoggle, unless Van can debug the glitch that's knocked it out of commission. Little does he suspect that the problem has nothing at all to do with software . . . and that what's really wrong with the KH-13 will force Van to make the unlikely leap from scientist to spy, team up with a ruthlessly resourceful ex'special Forces commando, and root out an unknown enemy . . . one with access to an undreamed of weapon of untold destructive power.

Reviews of The Zenith Angle

A novel from Bruce Sterling is always cause for celebration, and The Zenith Angle is one of the finest contemporary novels and finest techno-thrillers of 2004. -- Cynthia Ward, Amazon.com

Like many of his other novels, "The Zenith Angle" suffers from an uneven pace - usually a deadly weakness for thrillers. -- Dorman T. Shindler, The Denver Post

The Zenith Angle is all action (like the world of information...information not being information until it is touched) but no story. -- John Clute, Scifi.com

Ultimately, I think fans of Sterling will be pleased, but not thrilled. -- Ernest Lilley, SFRevu

Indeed, Van's story floats on a Sargasso sea of jargon and bureaucratic acronyms that grows ever thicker as the threats escalate from ''infowar'' and ''cyberwar'' to vintage mad-scientist ''spacewar.'' -- Gerald Jonas, The New York Times