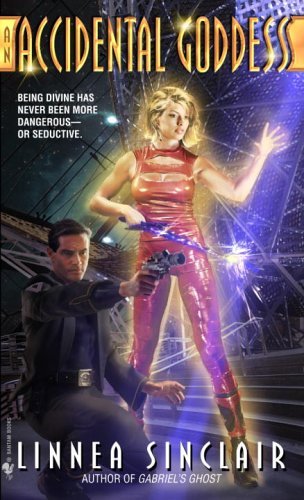 Synopsis of An Accidental Goddess

Raheiran Special Forces captain Gillaine Davre has just woken up in some unknown space way station, wondering where the last three hundred years have gone. The last thing she remembers is her ship being attacked. Now it seems that while she was time-traveling, she was ordained a goddess.... Gillaine's only hope of survival rests with dangerously seductive Admiral Mack Makarian, who suspects her of being a smuggler-or worse. But he can't begin to imagine the full extent of it. For Gillaine is now Lady Kiasidira, holy icon to countless believers, including Macka man who inspires feelings in her that are far from saintly-feelings she knows are mutual. But when their flirtation is interrupted by a treacherous enemy from the past, Gillaine's secret-and secret desires-could destroy them both....

Reviews of An Accidental Goddess

Readers will agree that this is a FINDERS KEEPERS tale. -- Harriet Klausner, ParaNormal Romance Reviews

Ms. Sinclair's third novel is as engaging as its predecessors, fast-paced and hard to put down. -- Christine Bertz, Fresh Fiction

I highly recommend you grab hold of this Book as quickly as you can. -- Cyndi Witkus, In The Library Reviews

An Accidental Goddess is a fast-paced romantic sci-fi adventure which will appeal to readers of all genres. -- Colleen Helme, Rebecca's Reads

This is exquisite storytelling that combines delicious romance, a spellbinding plot, and vivid characters into a powerful drama that transcends genres. -- Kelly Rae Cooper, The Romantic Times Book Club