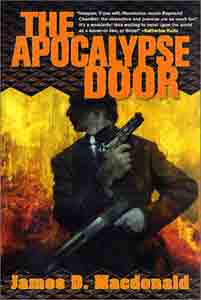 Synopsis of The Apocalypse Door

A dash of medieval mystery adds zest to this inventive melange of hard-boiled thriller and speculative fantasy. The refreshingly original hero, Peter Crossman, is an Inner Temple soldier in the Knights Templar, an order of paramilitary priests that has existed covertly since its presumed dismantling in the 14th century. Although he's used to challenging missions, Peter's latest proves a doozy when a tip on the whereabouts of a missing U.N. peacekeeping team leads him to a warehouse in Newark and a crate of living mushrooms that appear to flinch at the sign of the cross. Peter and his partner Simon later stumble on the gruesomely mutilated bodies of their confederates and wind up in the hands of the Teutonic Knights, a heretical rival sect whose figurehead, a brazen talking effigy, is the otherworldly key to past and present intrigues that have bedeviled Peter and his order. The jolts and torques of the roller-coaster plot are completely unpredictable, but Macdonald sets them up credibly, with subtly deployed clues and skillful misdirection of the reader to supernatural explanations for crucial plot developments. The Knights Templar angle also gives events an interesting moral dimension and a distinctive focus for the development of Peter's character through the unique obligations it creates (such as having to give absolution to an assassin preparing to kill him in an early scene). Though other novels have blended mysticism, mystery and fantasy, few have done it as smartly or succinctly as this one with his wife, Debra Doyle, under the pseudonym J.D. Macdonald.

Reviews of The Apocalypse Door

...there are evil mushrooms, which alone recommends the novel. -- Victoria McManus, Zentertainment

You have to hand it to James D. Macdonald. He's got absolutely no timorous compunctions about taking several millennia of sacred devotion and worship and holy iconography and turning it all into a pulp thriller. -- Paul Di Filippo, Scifi.com

The Apocalypse Door is a very funny Book in many way -- iberately so. Is this a problem? No, and yes." -- Eva Wojcik-Obert, Fantasica Daily

THE APOCALYPSE DOOR is one of the juiciest satires to come along in years as the plot swiftly disses many of society's untouchable giants. -- Harriet Klausner, BooksNBytes

James Macdonald has offered up a novel full of promise that delivers it all in the end. -- Bruce Wallace, SFRevu

Think Philip Marlowe with a priest's collar and the fate of the world on his plate. -- Patrick Heffernan, Mysterious Galaxy

A story that postulates the continued secret existance of the long-banned Knights Templar, of the Teutonic Knights, and of assassin nuns can't be all bad and THE APOCALYPSE DOOR isn't. -- BooksForABuck.com