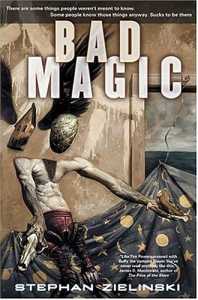 In sheer self-defense, most of the human race long ago taught themselves to shut their magical Third Eye, blinding themselves to this supernatural world around them. As protection goes, it's not 100% effective, but it's still pretty good: If you can't see them, they can't see you.

Fortunately for the rest of us, a few people can deal with the weirdness. In San Francisco, a motley group of adventurers have banded together to fight evil. They're an uncanny mix of alchemists, thaumaturges, necromancers, and totemists, working their wildly different magics in a milieu where thaumaturgy is a laboratory science and raw pain can be kept in a flask of liquid nitrogen. They know they don't know what they're doing. And they have to save a world that doesn't know it's under attack from forces that they wish were beyond comprehension.

Zielinski's debut novel is an edgy roller coaster ride of thrills and chills as the classic confrontation between good and evil plays out with no guarantees as to whom will triumph. -- Harriet Klausner, ParaNormal Romance Reviews

Between zombie dogs and sea battles, totemic jaguars and gunfights, things get a little confusing, but there's a nice payoff in store if you can hang on for the ride. -- Jen Talley Exum, The Romantic Time Book Club

During the course of the novel, readers will undoubtedly be questioning Zielinski's sanity; but regardless of his mental well-being, one thing is certain: Bad Magic is pure literary genius. -- Paul Goat Allen, Barnes and Noble