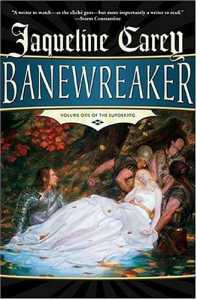 Following the triumphant success of her Kushiel Series (Kushiel's Dart, Kushiel's Chosen, Kushiel's Avatar), Jacqueline Carey now turns her hand to another startling fable, an epic tale of gods waging war in their bid to control an entire universe and the mortals they use as chess pieces in a most deadly game.

Once, the Seven Shapers dwelled in accord. First-born among them was Haomane, Lord-of-Thought and with his brother and sister gods, the Seven drew upon of the power of the Souma, claimed a race of beings for their own and began Shaping the world to their will.

But Haomane saw the ways of this new world and was displeased. For in his younger brother Satoris, once called the Sower, Haomane thought too prideful and in his gift, the quickening of the flesh too freely to the races...and to that of Man in particular. Haomane asked Satoris to withdraw his Gift from Men but he refused. And so began the Shapers' War.

Eons have passed. The war that ensued Sundered the very world. Haomane and his siblings lay to one end of a vast ocean unable to touch their creations, Satoris and the races of the world on the other. Satoris has been broken and left adrift among the peoples of the world and is reviled, with most of the races believing that it was he alone who caused the rift and depriving them of the balm of the Seven. He sits in Darkhaven, controlling his own dominion--seeking not victory but neither vengeance.

But still Haomane is not content. Through Haomane's whispers in the minds and hearts of the races of the world come a prophecy that if Satoris were defeated, the world could be made whole and all would bask in the light of the Souma again. And the few who stay by Satoris are viewed as the ultimate evil. And so the races come together to defeat Satoris, a being who helped engender them all but who is caught in his elder brother's warp.

If all that is considered good considers you evil, are you?

I stayed up all night reading it...it's rich and believable and horribly tragic. -- Madeleine Yeh, SFRevu

Similar to the Tolkien mythos, genre fans will appreciate Jacqueline Carey proof that she has plenty to offer readers beyond Kushiel with this fantastic tale in which good and evil is blurred except for a tremendous public relations campaign. -- Harriet Klausner, The Best Reviews

Though Banewreaker is solidly plotted and beautifully written, none of the characters are particularly compelling, which makes this a difficult read and doesn't engender much sympathy for the difficult decisions that either side is forced to make. -- Natalie A. Luhrs, The Romantic Times Book Club

I continue to be surprised, delighted and impressed by Jacqueline Carey, and I think you will too. -- T. M. Wagner, SF Reviews.net