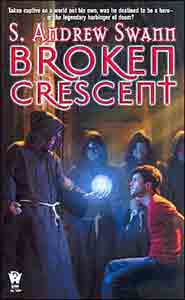 College student Nate Black is a top-notch computer hacker. But he's long since stopped the kind of hacking that could put him behind bars. Under the guise of his user i.d., Azrael, he has never been discovered. That is, until Nate gets an anonymous email, after which nothing will ever be the same. He's abducted to an alien world, where magic is the rule, the gods are all too real, and a twist of fate makes him the most valuable pawn in a terrifying game of power.

The plot does have a kind of inevitable logic. -- Pauline Morgan, SFCrowsnest

BROKEN CRESCENT is a superlative reading experience and this reviewer would like to see more Books written about this true hero and this imaginative world. -- Harriet Klausner, ParaNormal Romance Reviews

Swann delivers the punch when it is needed and keeps you interested throughout with compelling yet sometimes-deceitful characters firmly entrenched in their own belief systems. -- Jeffrey J. Lyons, SFRevu