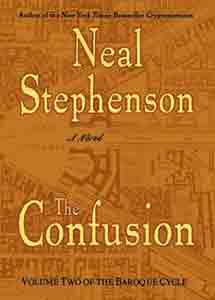 The Confusion (The Baroque Cycle, Vol. 2)

Synopsis of The Confusion (The Baroque Cycle, Vol. 2)

In the year 1689, a cabal of Barbary galley slaves -- including one Jack Shaftoe, a.k.a. King of the Vagabonds, a.k.a. Half-Cocked Jack, lately and miraculously cured of the pox -- devises a daring plan to win freedom and fortune. A great adventure ensues, rife with battles, chases, hairbreadth escapes, swashbuckling, bloodletting, and danger -- a perilous race for an enormous prize of silver ... nay, gold ... nay, legendary gold that will place the intrepid band at odds with the mighty and the mad, with alchemists, Jesuits, great navies, pirate queens, and vengeful despots across vast oceans and around the globe.

Meanwhile, back in Europe ...

The exquisite and resourceful Eliza, Countess de la Zeur, master of markets, pawn and confidante of enemy kings, onetime Turkish harem virgin, is stripped of her immense personal fortune by France's most dashing privateer. Penniless and at risk from those who desire either her or her head (or both), she is caught up in a web of international intrigue, even as she desperately seeks the return of her most precious possession -- her child.

Newton and Leibniz continue to propound their grand theories as their infamous rivalry intensifies, stubborn alchemy does battle with the natural sciences, nobles are beheaded, dastardly plots are set in motion, coins are newly minted (or not) in enemy strongholds, father and sons reunite in faraway lands, priests rise from the dead ... and Daniel Waterhouse seeks passage to the Massachusetts colony in hopes of escaping the madness into which his world has descended.

Reviews of The Confusion (The Baroque Cycle, Vol. 2)

Stephenson once wrote an essay for Wired on the laying of underwater communication cables that was as lengthy as a short novel, and made it captivating. But here he seems to have poured in almost more substance than the container can hold, and diluted the true essence of his work. -- Paul Di Filippo, Scifi.com

Characters recite lists of dates and events. Pages read as if they have been copied directly from history Books. The effect is not only boring, but deeply disappointing. -- Josh Lacey, The Guardian

There is no doubt that this epic historical action thriller provides a wonderful witty winner as Neal Stephenson paints a masterly look back as he did in QUICKSILVER. -- Harriet Klausner, Harriet Klausner's Review Archive

Jack's adventures from South America to Japan and Eliza's maneuverings in Europe draw you along at breathtaking speed with enough momentum to propel you through the 800+ pages. -- BooksForABuck